Try not to feel anxious or overwhelmed by your thoughts or new actions as indicated by the cards this week. What number did you pick 1 – 5? Watch the video or read Rose Smith’s psychic interpretations for each number. 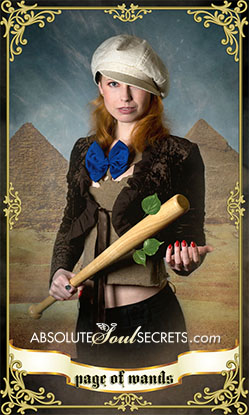 Indicates some good news around 2 fronts – travel or your physical body. Wands are very fiery and inspirational. You may be feeling a desire to move your body, do a detox or exercise program. Move your body, do some dance and get some insight coming about your body. It’s a great week if you’ve been thinking about travel, take some action steps.

The pyramids in the background suggest travel or the chakras in your body. See the baseball bat she’s holding, you can take your inspirational feels and actually do something, action needs to be taken in alignment with your feelings. There’s some greenery which suggests opportunities & growth as well as some communications indicated by the blue on her throat chakra.

I can see in Spirit 2 hearts – bright yellow & pink. Yellow indicates insight, awareness, even happiness. You could be happy this week about something close to your heart. The pink heart relates to self-nurturance and self-love. There’s a ship here that has sunk in other words if you had some heart’s desires that failed, there’s another ship in the background. I hear “your ship has come in but it’s not the ship you thought”. So there’s a 2nd opportunity coming which is actually better.

This week is great for new starts on a physical level, particularly money. New starts around finances and there’s a new opportunity around money or something that you value that is physical. Start anew. It’s also good for relationships, particularly if you’ve met someone on the internet, you could meet this week. Get the relationship down on the ground and into physical reality. Go for it this week!

I see a lot of light from the side coming in, maybe you’re moving forward but something comes in out of left field, it’s unexpected and gives you awareness about a certain situation. I can see some people with chains on their wrists attached to a railing. You can set yourself free and you don’t need to be trapped in an old situation anymore.

This is a fantastic card. It’s not always what people think. It’s about stepping forward into the unknown and taking a risk. We may have an idea in mind but we don’t really know, but we’re going to move forwards anyway! You can see the little dog holding onto her pants whilst trying to hold her back, he’s barking saying ‘don’t do it’. This little dog is a little yapper, he could be family or friends or even yourself. Just keep moving forward and don’t listen to the naysayers, do what you think is right.

She has a stick with a bag indicating travel, but not necessarily physical travel, it’s more metaphorical. This is travelling in your own mind and moving forward on something new. Do it! The Universe will look after us, especially when we’re moving forward with faith and trust. See she has one foot with no shoe so she’s touching the ground. She’s practical and real. If people are telling you not to do something, keep it grounded and real and do it!

There’s a slippery slide in front of me in Spirit, you may have had an idea about something and now your sliding into something else. It could be fun, exciting like you’re at a slippery slide at a theme park somewhere. It could be a new relationship that you’re unsure of. The other thing it could be is sliding down into depressed feelings, but the antidote is to relax. Spirit is telling me they don’t want you anxious about anything, take it easy and step by step. I see the playing card 10 of Spades in Spirit indicating the end of a cycle and the start of something new. Don’t work yourself up about anything.

Indicates the ultimate authority figure! This could be you, if it is, don’t ‘lord it’ over other people and if it’s someone else, don’t allow them to ‘lord it’ over you. This is about domination and power. This could be a government department or someone you perceive is above you in some way. It could be a fatherhood figure, old fashioned, convention, tradition. The way through this is to play by this guy’s own rules. If you try to challenge him, it could be a mess. This is not necessarily a bad card because you may be seeking structure and convention in some way, he could give you safety and stability. If you’ve had an unexpected turbulent time with your emotions, he could make you feel safe and secure. Red is about action and this is on the physical plane. You could be the authority figure, especially with regard to your work.

I see the ocean in front of me in Spirit, it’s not smooth sailing but it’s not bad, maybe a little bit exciting. There’s a breeze in your face and hair which can feel invigorating. It’s quite close to physicality, but more about your emotions and spiritual reality. Things coming up this week from deep in the ocean of your subconscious. Sometimes things come up and this week, you could find some treasure chests and rewards from your subconscious! It reminds me of the Mediterranean sea, a beautiful shade of blue relating to self-expression.

And I see silver coins for change. This indicates the mental realm, your cognition…. thinking. See here in the background there are 2 reflections which are not real, they’re just reflections of the past. These are like harmonics on a pond when you throw a stone into the water. Just be aware you could be influenced by something in your subconscious from the past. Don’t worry so much, this is like a cycle coming back but it’s not exactly the same. You could be thinking about relationships or money situations in the past. See she’s got 2 swords there, that’s about cutting and dissecting, analysing. Thinking about these things and sorting them out.