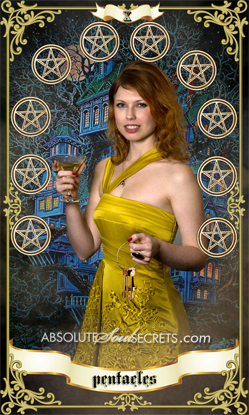 This indicates success around a project. It’s a great card if you’ve had money issues recently. The 10 of Pentacles is about completion and there’s some happiness and relief. You could get some unexpected money or you’re feeling better about finances. She is celebrating as she has a glass of champagne in one hand and making a fist with the other. She’s feeling successful.

This is for physical projects and/or money. The pentacle suite is all about what happens on the physical plane. If you’ve been working on a project, this indicates the successful end and you will be well rewarded.

When I close my eyes for this, I have the sense of blue, like the ocean. It’s lively but not choppy, it’s not a storm. I see big waves which are like emotions or subconscious things coming up which are invigorating. It’s not bad at all, it’s exciting!

I was just talking about emotions then and Cups are very emotional cards. Things could come up out of your subconscious. Knights are usually about going around the countryside ‘sowing their wild oats’ which means broadening your horizons and maybe romance. In this case, it’s about allowing your emotions to come up and expressing yourself.

Being more yourself it’s a young masculine energy, even if you’re a woman – you still have masculine energy in your psyche. Broaden your horizons in an emotional sense. He’s having a drink which is fine, just don’t overdo it. If you get carried away, it can indicate addiction, but I don’t think that’s a real issue. He’s riding a scorpion or a creature from the deep. He has a starfish which is a good omen in his hand. He’s in touch with his subconscious but enjoying himself. He’s moving forward and riding the waves of the deep, expressing his creativity.

In Spirit, I’m seeing a dam wall which could burst. It’s like holding your emotions back and could be in connection with your physical body also. Dams are usually built on rivers and rivers are the rivers of life. It’s the lifeforce energy that flows into every cell. If you dam that up, there could be an illness or physical problem. Be careful and if you have any tonics especially with cat’s claw herb in it, this is great for respiratory illnesses and flus.

I feel like some part of you is dammed up and will burst. You could have a mini meltdown this week where it all comes out because you’re fed up to the back teeth and don’t want to take it anymore. It would be good to do some journaling first so then you’ll be more in control of what you’re saying. That way you’re less likely to say something you’ll regret later.

This card sort of fits with the dam wall idea as she is contained within a structure, she’s imposing this on herself. However, windows can also mean opportunities. It might be appropriate to hold back a bit e.g. if you’re at work or something, it’s appropriate not to spill everything out. Wands are a very motivated and fiery energy. You could be feeling the fire in your own heart, there’s something brewing here that you might have been sitting on for a while. There’s something you want to do that requires planning and work. She’s sitting in a window of opportunity which you can utilise to get what you want this week; it may be at home. It will require work and action steps later on, after you feel all the feelings.

When I close my eyes in Spirit, I can see some things falling apart that need to. Let go of the past. If there’s any sort of trauma or drama, do try to rise above it. I know it’s difficult. Out of that difficult situation I can see a light rising and shining putting you onto the right direction. Something falls apart so you can start on the correct path.

No 4. Card – The Heirophant

This card is no. 5 of the major arcana and indicates tradition or convention. This is an authority figure like a government instrumentality, the church, or someone above you in some way. Could also be something legal. It’s hard to negotiate because they have their rules, their organisation and structure.

You’ll see there’s a book with 2 keys, so although it’s hard, there is the opportunity for a pathway through if you follow the rules. So it’s all about the rules, please don’t take any shortcuts, or try to do it too quickly. Don’t be slapdash or half hearted, it won’t work with this energy. It’s a Capricornian energy, so you have to put the energy in, work towards what you want to do and follow the rules. If you do that, you’ll be fine. Some people interpret this card as indicating the patriarchy, all about structure, convention and you have to work with it, not against it.

Closing my eyes, I see stairs, a woman ascending a wooden spiral staircase. This is about becoming more aware, insightful and ascension in consciousness. Then I come to a landing and look out a window over sprawling plains. There’s lots of people out there. You might find yourself feeling more isolated as you are separated but not in a negative sense. They are stuck where they are, but you’re not.

You’re moving forward and rising in consciousness. Sometimes we have to let go of situations or others because you’re individuating and moving away from the past. It’s actually good, although it might feel disconcerting at first. A change in direction.

You should be proud of yourself as you are in control of your emotions. You’re allowing your emotions to vent and you’re managing this in a healthy way. Even if you’re a woman, you still have masculine energy. The King is wearing navy blue, this reminds me of Archangel Michael. He has a Crown on his head and a Cup indicating celebration and also the holy grail. This gives you vitality and is good for health especially if you’ve had any health scares or niggling health problems This is a really good card indicating success and happiness this week. You could be feeling really good. Well done you!

Finally for everyone watching, I can see in Spirit, multiple spotlights shining down on the Earth. The emphasis is on physical things, even if it’s just getting organised at home, cleaning out cupboards or doing other home things. Doing these things will give you a sense of achievement and increase your sense of self-esteem, because you’ll be getting stuff done. After you finish, then you can celebrate.