Pick a card 1 – 5 and read what Rose sees for you spiritually this week. Collectively, we are coming to the end of an age so a new age can begin. The Age of Aquarius has begun but still there’s some remnants of the past hanging on. Watch the video below from Rose. 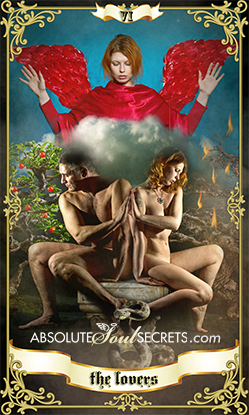 This is great & fantastic. It does auger well for romance but it’s more than that. This is indicating that you’ve met someone recently or someone is coming soon. But it’s more than the physical side of romance, it’s about integrating the energies that person represents. Deep down in your subconscious, there is an energy very similar to the person we’re talking about. We all have this propensity or inclination towards healing, so Spirit wants this unconscious energy to come forward into your consciousness.

This could be a person opposite to you in some ways or you might not normally be attracted to them, but there’s just something particular about this person that is magnetically pulling you in. The lovers are together, but it’s a bit ‘push me pull you’ or ‘on again off again’. There’s an angel looking down over all the proceedings, this is a major arcana so very important to you. It could be on off, on off for some time. You will need to make a decision at some point as to what you want.

This is great for starting something new. Something you’re thinking about, planning, decision making or strategy. It’s fantastic for starting a small business, marketing, promotion. The sword is about making decisions, analysing & dissecting a situation. It’s important to have all your mental faculties working properly, so you can cut out something superfluous.

You could possibly overthink something and 2nd guess yourself. Racing thoughts could be an issue, but mostly this card is good for new starts. Get the right balance of heart desire, taking action steps, and analysing a situation. Don’t overthink things. I don’t see the suite of swords as negative, there are good aspects for working & money.

This is not a bad card at all. Sometimes people freak out a bit getting this, but it just means delays and being patient. You’re waiting for something, but on a spiritual level – it’s preparation. It’s like being 9 month’s pregnant, you have to wait that last little bit. In numerology there are numbers 1 – 9 and then there’s 0 where you’re in an in between space. It can be about anything at all. If you’re waiting for something, please be careful that you don’t ‘weight’! Sometimes we can put on weight with this card when we’re sitting around waiting because the subconscious doesn’t spell all that well! It’s waiting only for a time, not forever. Something major is going to happen when the time is right. It may involve other people and that’s one of the reasons for waiting.

Closing my eyes here in Spirit, I see rubbish foods, paddle pops, chips (or crisps). I’m still on card no. 3, eating rubbish foods could make things take longer. You could get constipated… you need leafy greens and vegetables. Steer clear of heavy foods and drink 8 glasses of good pure water daily. You want things that go through your system quickly. Wait and weight sound the same to the subconscious. Your body is putting on wait if you’re waiting. Extra padding is energy you’re carrying to do something, that you haven’t been able to do. It might be to do with others that you’re waiting on or external circumstances.

So another card indicating cognition and mental ability so think and use your brain but don’t overdo. Quick flashes of brilliance, unique and original thoughts and good news. A small flock of 4 birds plus a separate bird indicate flying high, looking at the big picture. Don’t get stuck at grassroots level. You can look into the future and perceive. If you’re working in your own business, if you possibly can, get someone to do the grassroots work. Your time is better spent looking at the big picture and overall concepts.

This could apply to everyone, not just small business owners, could be normal everyday life where you need to take a bigger point of view. Just allow your mind to open a bit more and talk to other intelligent people to get new ideas. Sometimes you can talk to someone with the magical ability for common sense. Even your children could help you out by getting to the core of the issue that you can then set about rectifying.

The issue comes with overthinking. This woman is unconscious or asleep which is fine but we don’t want our everyday life interrupted by levitation because we won’t get much done lol. Be careful of fantasy thoughts that are not based on physical reality. It’s ok to have fantasy thoughts but they need to be kept in balance with practicality. It is easy to get caught up in your head and float off with the fairies so stay grounded. There’s a large bird in the bird sitting in the background with a clock. It’s a hawk, so it’s all about timing, at the right time it will happen. Take note of your fantasy thoughts and the things that are not real, but keep your feet on the ground. It’s also a good time for rest and recuperation.

In Spirit, I can see a man playing a fiddle or a violin and an audience with trumpets. This is an apocalyptic type vision set in modern times. The man playing a fiddle reminds me of Nero when Rome burned, that’s a saying but not quite true… it means someone who neglects their duties and doesn’t do much. You could be coming to the end of something. I do feel this is not so much for the individual but it’s for the collective.

We’re coming to the end of an age so a new age can begin. The Age of Aquarius has begun but still there’s some remnants of the past hanging on. There’s different schools of thought as to when the Age of Aquarius began, some say 1968, some 2012 and some in the 1990’s. The old structures are passing away. Something ends and something starts. Do try to stay calm but don’t repress your feelings. Write your feelings down in a journal or talk to someone you can trust!