Like all heavenly bodies, asteroids have various effects on humanity and when they go retrograde (appear to go backwards), these effects can vary. It’s important to remember that planets and asteroids don’t actually go backwards. However, if we could look out at the night sky and actually see all the planets and asteroids, there would be times during the year where they appear to be travelling in a reverse direction. This is due to an optical illusion caused by the planet or asteroid’s orbit.

Although retrogrades are often disruptive, they also hold opportunities for us, so they’re not all doom and gloom! Although disruption is uncomfortable because it shakes us up, it also causes hidden treasures to rise from the subconscious. We may discover we have newfound gifts and confidence that we didn’t previously have access to.

When planets or asteroids go retrograde, often there are karmic factors at play. Although a particular situation may seem unfair at the time, we are affected by the accumulated total of all energies both this life and previous lives. More is going on beneath the surface than we often realise. Retrogrades help clear our karmic debts and credits. Sometimes karma will throw up a positive situation like a bolt out of the blue.

The asteroid Lilith can be very important in a woman’s life (she also has several other manifestations including Black Moon Lilith, Trinity of Lilith and Lilith Star) but this year she is not going retrograde so not included in the following retrograding asteroids list. 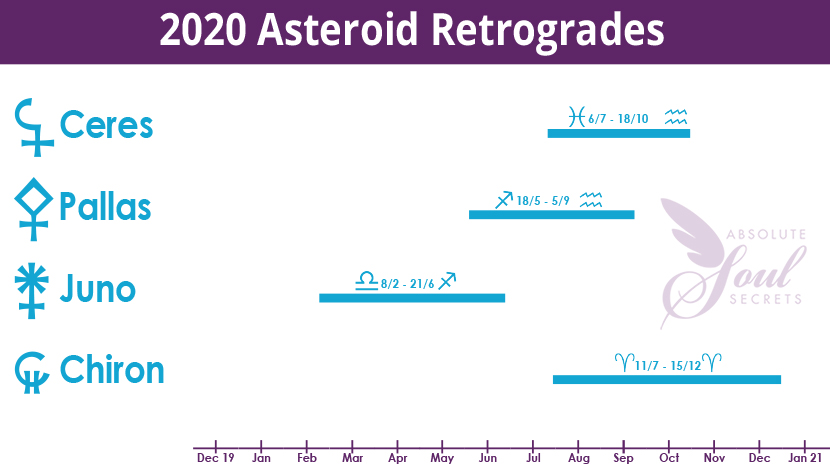 The Four Asteroid Retrogrades & Other Asteroids

Ceres was reclassified as a ‘dwarf planet’ in 2006 and is named after the Roman Goddess of agriculture. Sometimes she is shown holding shafts of wheat as she has a special relationship with Mother Earth. In ancient mythology, the daughter of Ceres was Persephone and she was married to Hades, ruler of the underworld. Ceres was so grief stricken that her grief forced the Earth into a perpetual state of winter and no grain would grow during this time resulting in subsequent famine.

Initially considered as to be a planet and orbiting slightly closer to the sun than Pallas or Ceres, Juno was named after the mythological Queen of all Roman Goddesses. Queen Juno was regarded as a female guardian angel, as she looked after women and ruled over marriage. She also represented the feminine principle of life and was the ‘saviour’ of both women and the state.

Chiron orbits in the Kuiper belt which is between Jupiter and Neptune. He is now classified as both a minor planet and a comet, although he was originally designated as an asteroid. Chiron orbits between Saturn and Uranus, so issues with authority figures and unpredictable tumultuous events can be indicated if you have strong Chiron aspects.

Asteroid Vesta was named after the Virgin Goddess Priestess. It’s important to note that the word ‘virgin’ here means ‘a woman one in herself’. This means she is not dependent on any one man. She may be with a man if she chooses but she is financially and psychologically independent.

Click on any of the link buttons below to find out more about your 2020 Horoscope.